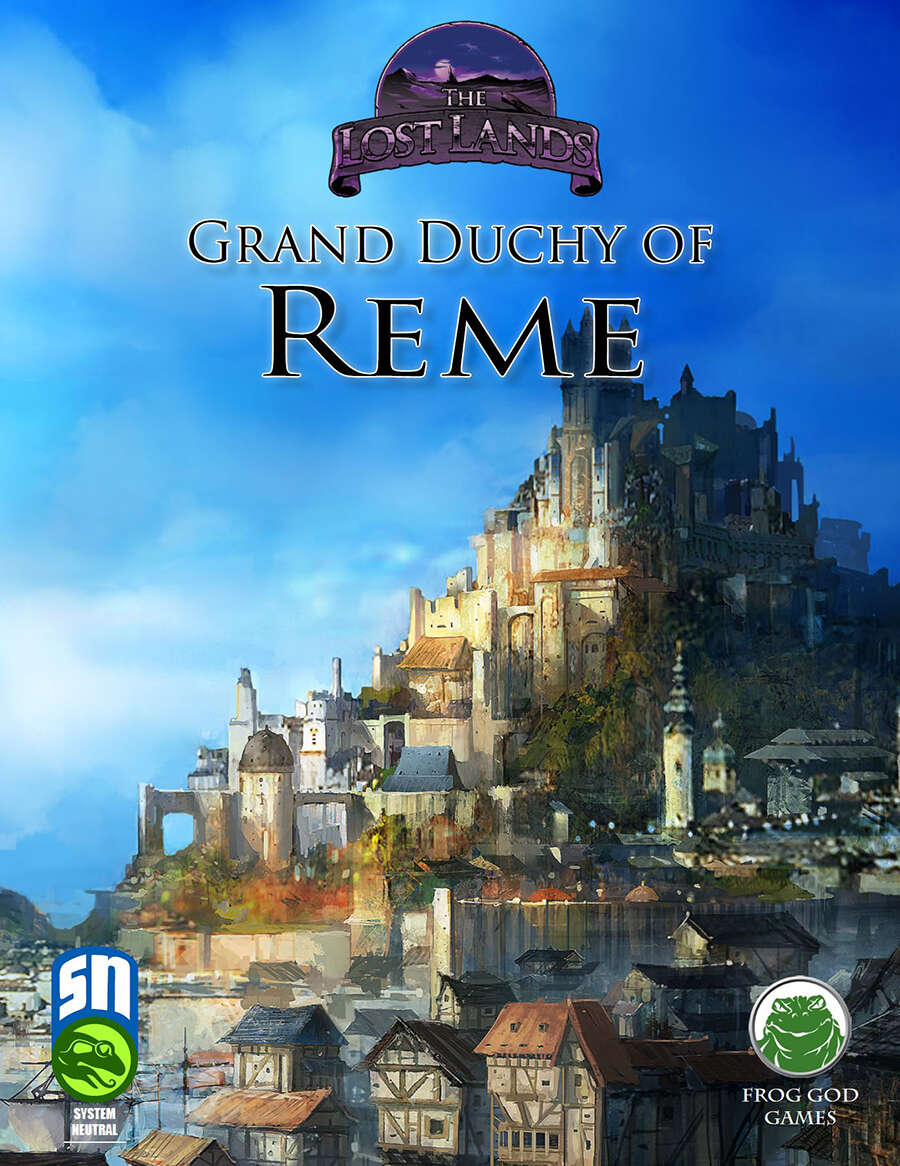 Grand Duchy of Reme
Contributions: Author
Publisher: Frog God Games
Publication Date: September 25, 2020
The Grand Duchy of Reme is a vast realm: a network of well-settled river valleys running through enormous areas of almost-uncharted wilderness. To the west, Reme’s territory extends to the Deepfells Mountains and the forbidden Green Realm of the wild elves. To the east, it reaches to the town of Fareme near the western edge of the Stoneheart Valley. Its northern border is the Wizard’s Wall across the Crynnomar Gap, and to the south, the realm extends to the Whiterush River. The land borders of Reme do not tell the whole story, however, for Reme is also a seafaring nation, one of the most significant in the world. The grand duke has no colonial aspirations, but the nation has been focused on dominating trade on the Crescent Sea for centuries, and Rhemish ships venture throughout the known world from the city’s great port.
In overall size, the Grand Duchy of Reme technically rivals the entire holdings of the overking of Foere and exceeds that of the actual Kingdom of Foere by quite a bit. However, most of Reme remains wild, inhabited by nomadic Loreclans rather than agrarian settlements. With the exception of river valleys, Reme is almost entirely a vast grassland prairie poorly suited to farming. The Frontier in the northwest is only nominally under the jurisdiction of the Northmarches, for the reach of the duchess at Ironfell only barely extends into this region. In the west, permanent agricultural settlements have only recently begun to form in the Windreft following the resolution of civil wars that ravaged the Westmarches for the last several decades. The civilization of Reme is powerful, but the settled population is widely scattered in pockets and along the great rivers.

Given the uneven settlement and great distances within the wild territories of Reme, the grand duchy has evolved into a number of marches providing for more local administration. Today, these are the Westmarches, the Northmarches, and Waymarch, in addition to the central lands held directly by the grand duke. The origin of power of the dukes of Reme are as Loreclannic chiefs, and their authority, developed over the course of millennia, extends to ancient Loreclannic boundaries rather than feudal grants of the land itself. The distinction between Reme’s Loreclannic traditions versus Foere’s feudal law is nuanced, but it is a key factor in understanding the history and the nature of the Rhemish people.
Available at: Drive Thru RPG Amazon Frog God Games